I do not remember the Gospel Hall revival meetings, but during the 30’s and 40’s and I believe into the 50’s, Lowry was a hub for these gatherings. Each summer the Lowry Plymouth Brethren organized a week long Bible Conference and people from around the state and beyond made the trek to Lowry for the event.


The Plymouth Brethren are a fundamentalist Christian Protestant sect characterized by extreme simplicity of belief and living. The "Plymouth" stems from origins in Plymouth, England. (Garrison Keillor grew up “Brethren”, which is perhaps why he chose radio over television.) The assemblies meet in a "Gospel Hall", emphasizing that the church is not a building, but rather the assembly of individuals, called out by God to be His people. The Plymouth Brethren are unusual in refusing a denominational name; they do not generally refer to themselves as "Plymouth Brethren," nor do they regard themselves as a denomination, citing I Corinthians 3:4, where Paul scolds believers for dividing themselves into groups. Thus there is no headquarters, no minister, no formal membership. Each local assembly is independent, linked with other assemblies by a common heritage and emphasis on the primacy of the weekly Breaking of Bread service.

For the summer bible meetings, teachers from both the U.S. and Canada came to Lowry and people from around Minnesota and beyond traveled for the spiritual uplift. Quite remarkable, particularly in the depression era. One itinerant missionary was Carl Armerding, who became a professor at Wheaton College in Illinois, and where his son Hudson was later the college president. From his obituary: "He was a striking man, very tall and erect. He loved to preach, especially the Psalms. You could pick up the different moods of the different writers of the Psalms, which were originally written as songs. He made the Psalms live. You could almost hear the authors singing."

One Duluth attendee's childhood memory of these meetings: "We did not go on vacations during the summer except that once a year we would pile into the car and drive to Lowry to attend the Christian conference held in that small town every summer. Mother and Daddy loved this time of teaching and fellowship with other Christians."

The Pine River branch of of the Hoplin clan occasionally made the trip. My Pine River cousin remembers her family staying above McIver’s store. Visitors were housed all over Lowry. Anyone with a vacant room let it out for 50 cents a night. Both the schoolhouse and the post office were used to bunk people. The meetings were held in the Town Hall and meals were served at the Gospel Hall, with Olga Dingwall and Florence Dahl doing the cooking. My aunt remembers mountains of doughnuts being made by Grandma Esther for the event. On the final day of the meetings, the attendees would gather on the street between McIver’s Store and the Town Hall for a hymn sing. I’m told there were some great voices.

(Some irreverent Lowry-ites referred to the meetings as the “mating meetings”, as a number of matches were made amongst the attendees.)

Note:  I hope someone with more knowledge of these Bible meetings will share.


I was raised Lutheran so I don't ever remember attending a Gospel Hall meeting, but my grandmother would take my Twin Cities Convenanter cousins to Gospel Hall Sunday School when they visited Lowry. On one occasion, being asked to look up a verse in Leviticus and fumbling around the New Testament, they were asked if they attended Sunday School at home. "Of course".  "Do you study the Bible?"  "Oh, no. We have Sunday School books." That did not go over well. And then, "Do you know any Bible verses?".  "Oh yes. Jesus wept". That went over even less well.

The Brethren doctrines profess utmost strictness: disapproval of all forms of entertainment, including dancing, cinema, theaters and gambling, with taverns and alcohol being especially singled out for ire. This contributed to the formation of a strong chapter of the W.C.T.U. (Woman’s Christian Temperance Union) in Lowry.  My grandmother attended the Gospel Hall and was a stalwart of the WCTU. 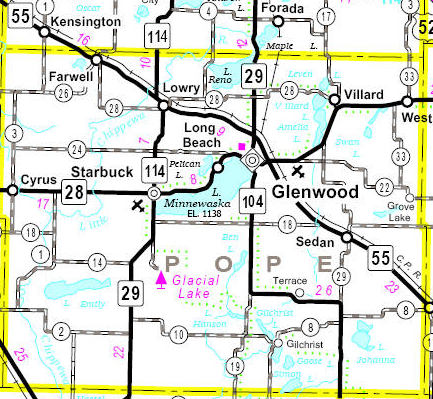 Lowry sits near the northwestern boundary of Pope County and some thirty years after the repeal of Prohibition, it was still a “dry county”, which in practical terms means 3.2 beer was the only alcoholic beverage that could legally be sold. To get schnapps or even “strong” beer, you had to go to a “wet” county - drive northwest to the Douglas County line and slip into the Kensington city liquor store or northeast to Forada where there was a bar. 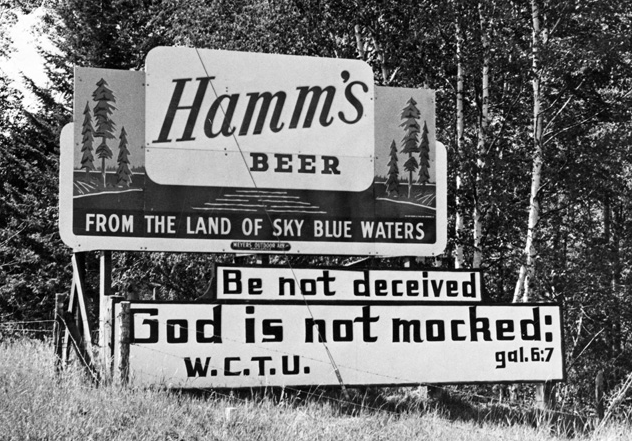 Every election year the heathen element at the county seat managed to garner enough signatures to put a referendum on the ballot to turn the county wet. They had dollar signs in their eyes over the prospect of municipal liquor store profits that were being siphoned off by Grant and Douglas counties. But they never really comprehended where political power resided. Pulpits bristled with rhetoric on demon rum and the WCTU blanketed the county with flyers claiming a vote for this referendum was sanctioning sin.

The WCTU was organized in the USA in 1874 and quickly became a national organization, and despite the image as a gospel temperance group, it was sectarian and campaigned for "national prohibition, woman suffrage, scientific temperance instruction in the schools, better working conditions for labor, anti-polygamy laws, Americanization, and a variety of other reforms”. It is the oldest voluntary woman's organization in continuous existence in the world.

The WCTU standard is “moderation in all things healthful and total abstinence in all things harmful” - Xenophon's definition of Temperance, 2500 years ago. 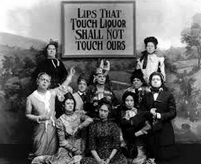 On the county referendum issue, the women of the WCTU controlled the family vote, their obedient husbands and any other relative that expected to remain in good graces. So the Pope County referendum continually went down in defeat, forcing the covert trips to Douglas county. 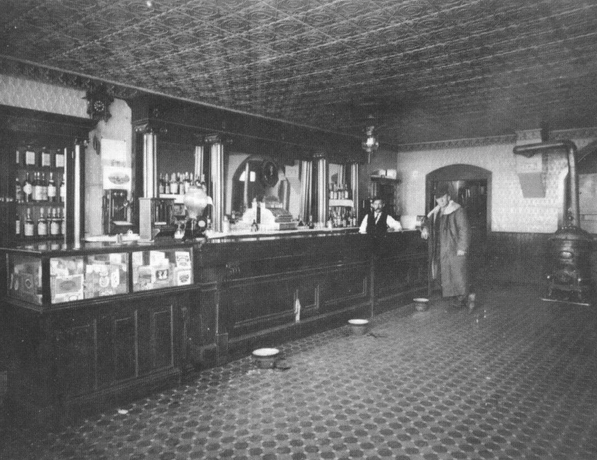 Lowry did have one tavern, referred to as the “beer joint”. Big Time’s dad was the tavern keeper and when I was feeling especially brave, I’d join him to play the pin ball style bowling machine in the tavern. This was leading edge pinball technology and playing it in a den of iniquity was exciting. I always checked the street for parents or grandparents before slinking in, taking a deep breath against the smell of stale beer. 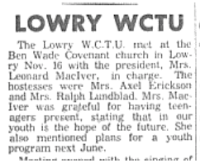 Since grandmother was a plenipotentiary of the local WCTU chapter, inevitably, I was enlisted in the grassroots door to door blitz to combat the evil, delivering leaflets to every house in Lowry, including across the tracks. It was not nearly as fun as covering the town on Halloween. I was not a reluctant recruit however, convinced that if I would take one sip of spirits, I’d be hooked and spend my life sitting in a parked car drinking rum out of paper bag. So I went door to door handing out leaflets and savaging imbibers.

Grandma was a saint, but she really did a number on me on behalf of the WCTU. I did not fail to notice, however, that we had a jug of Mogen David under the sink at home "for medicinal purposes". And then there was the time I joyously announced to Grandma that we had a six-pack of beer in our fridge. I don’t think I won any points with my father that day. And I seem to recall that Grandma’s brother kept a bottle of brandy in his room so as to “cut the phlegm”.

So, I leave you with words to live by, "everything in moderation, including moderation".
Posted by David Hoplin at 11:06 AM

When the Well's Running Dry

August 16, 2022  AT LAST.   At last a bare majority of the US Congress accepts that Climate Change is real and passes a bill to begin to add... 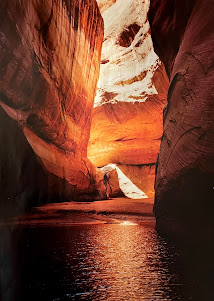