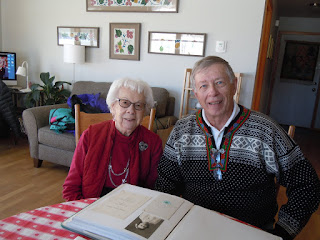 Four years ago I published a series of 8 posts documenting the WWII experiences of my wife's aunt, Othelia Rosten, covering her enlistment in 1942 in Duluth, MN, to North Africa, Italy, Southern France, into Germany and to duty at Dachau and finally to discharge in 1945. (see Othelia's Story)  These posts continue to yield serendipitous encounters. The first surprise (see Serendipity) was a call from Wolfgang in Ebermergen, Germany who had found the posts and recognized his little village in a photo. They had a group writing a book about the WWII  experiences of that area in Bavaria.  The second surprise was the arrival by mail of the book they had produced (see Serendipity, Chapter 2) which included numerous photos I had supplied.

And then, not long ago, I was contacted by the family of Adeline "Si" Simonson, one of Othelia's  Nurses' school classmates, fellow enlistee and tent mate throughout the war.  They told me that there was a surviving nurse from the 95th Evac who lived in Pelican Rapids.  A shocker.  I have an aunt who lives in Pelican Rapids.  So a quick phone call to Aunt Snella followed, asking her if she might happen to know a Marcella Korda? "Oh, you mean Marcy.  We sit next to each other every Sunday in church!".  Pew mates. Holy coincidence.

So, of course, a road trip - about a 4 hour drive.  We picked up my aunt and then Marcy and headed to the Muddy Moose for lunch. Marcy is turning 99 in Feb and is sharp as a tack. Don't tell the city cop, but she drives every day (only in town) -  to lunch with friends and to church on Sunday, where she is very active.

After a nice lunch, we retired to my aunt's home for coffee & dessert & to chat about Marcy's war experiences. Her army nurse life mirrors that of Othelia's  - except she's an Iowa girl and graduated from Mercy Hospital in Burlington, IA in 1942.  She enlisted soon thereafter and was sent to Camp Crowder in Missouri and then to Camp Breckenridge, KY where she met the Duluth nurses. I asked her what motivated her to enlist. "Well, the local hospital paid $60/mo and the army paid $90/mo, so it was the bottom line that tilted the decision".  "So 90 bucks got you into the army?" "Yup".

Marcy said, "Camp Breckenridge was pretty boring so they tried to teach the nurses close order drill.  Some nurses would go left, some right, about face was a mystery, so they finally gave up and decided nurses didn't need to know how to march."

The 95th Evac Hospital "OR was set up much like you see on M.A.S.H, with 6 operating tables in the large operating theater tent with supplies tables along the sides of the tent. The difference was .. we didn't have a gin still.  Officers got their gin from England." 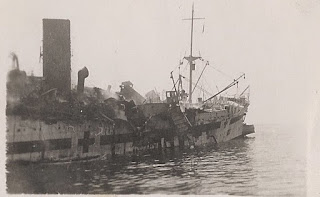 She recalled the experience of being aboard the British hospital ship, HMHS Newfoundland, when it was bombed in the harbor outside of Salerno in 1943.

"It might sound strange, but I wasn't really worried.  I realized the ship was on fire but I knew there was another hospital ship anchored nearby and thought we would just get in the lifeboats and sail over there.  When I got on deck and I saw all the lifeboats had been damaged by the bombing and the other hospital ship was pulling away, I started to get a little anxious." Ultimately, an escort ship rescued the crew and medical staff and although there were no deaths among the 103 American nurses, there were many casualties among the British: 7 nurses, 5 doctors and 6 enlisted men were killed including one British nurse who was stuck in a portal and on fire. A seaman knocked her unconscious as there was nothing that could be done to rescue her. (see Death in the Mediterranean)

Similarly, she recalled the bombing of the 95th's hospital on Anzio beach. Marcy was on night duty so she was not in the OR tent during the bombing, however, her (future) husband Henry Korda, a surgeon, received shrapnel wounds. Aunt Othelia also received a shrapnel wound. There were 28 deaths, medical personal and patients and 60 wounded, among them Chief Nurse, Blanche Sigman, the first US woman killed in action in WWII.
(see Anzio Bombing)

After the bombing Marcy was listed as Missing In Action, which quite naturally caused her family some stress. They received news of her safety about 3 weeks after the incident.


Henry & Marcy were married in France in 1945. The ceremony included a wedding dress and bridesmaids dresses mailed from the States.  Marcy was returned to the US in July 1945.

After the war in 1946,  Henry & Marcy moved for a short time to St. Cloud and then to Pelican Rapids on condition that the city would construct the planned hospital. Henry practiced there until his retirement. He died in 1990. Marcy has lived in Pelican Rapids for nearly 75 years. 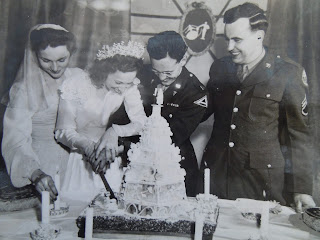 What do you wish for your children?

Unfortunately I cannot credit the source, but I once read a survey of mothers of the world by nationality. The single question asked was: &q...